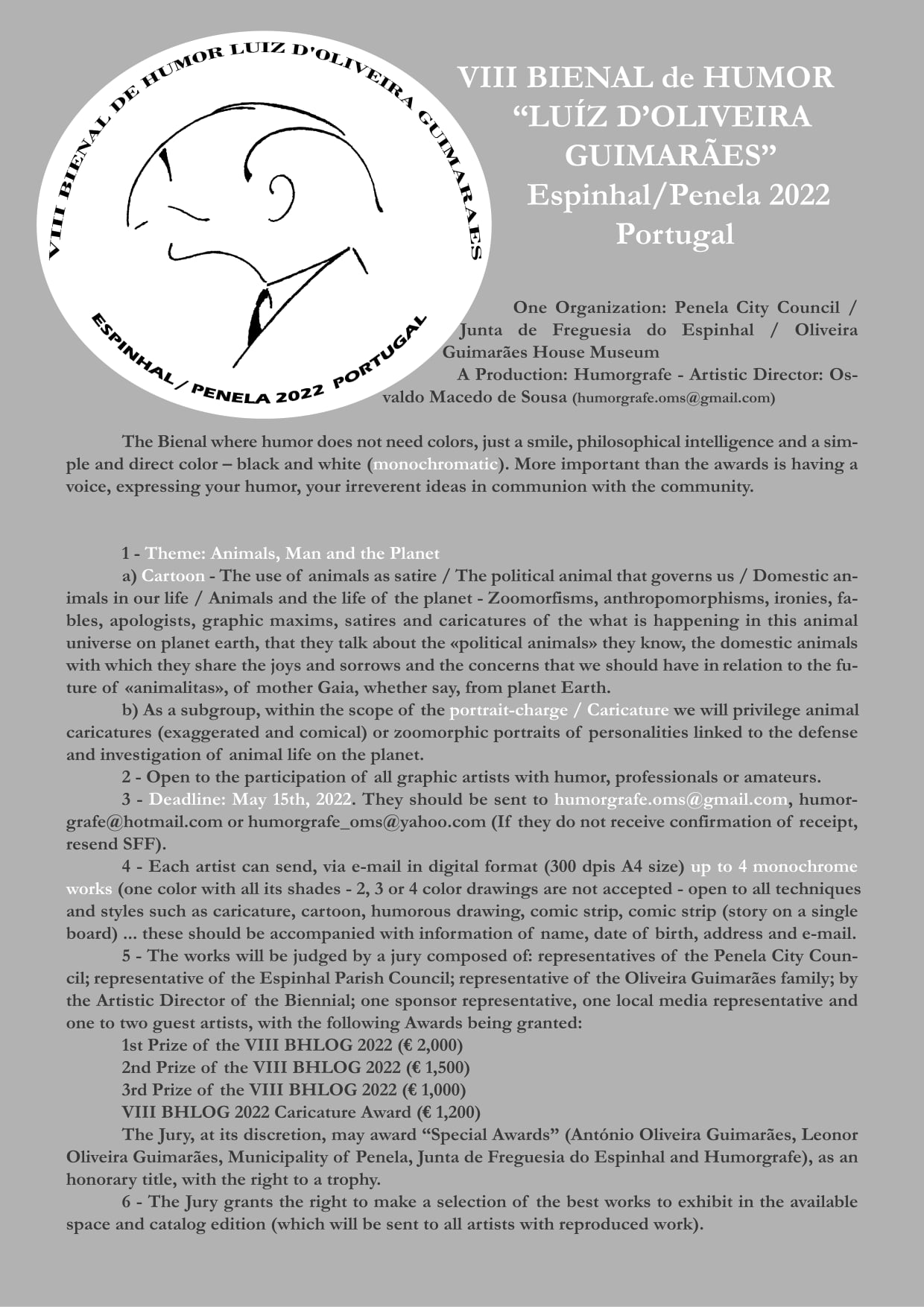 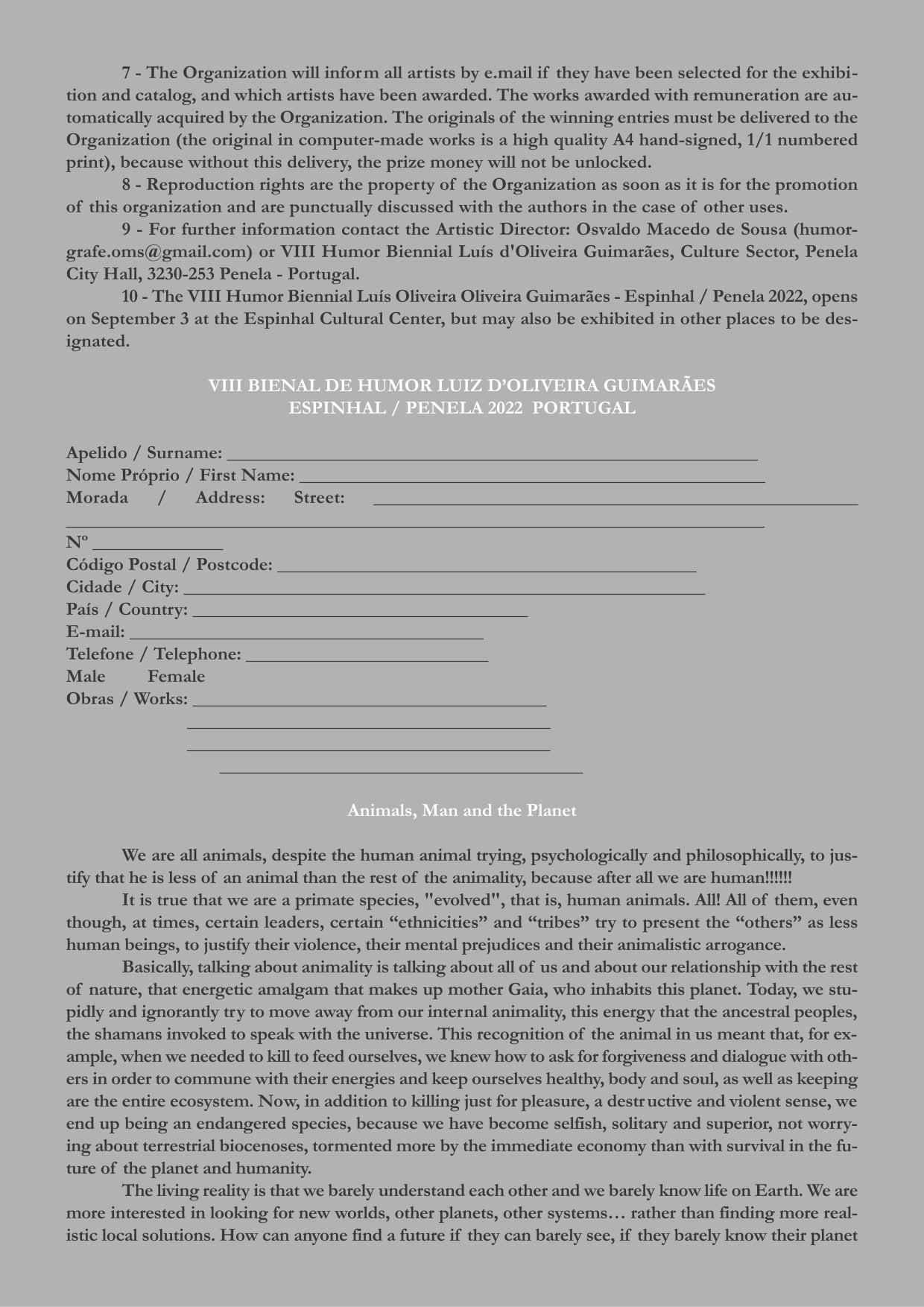 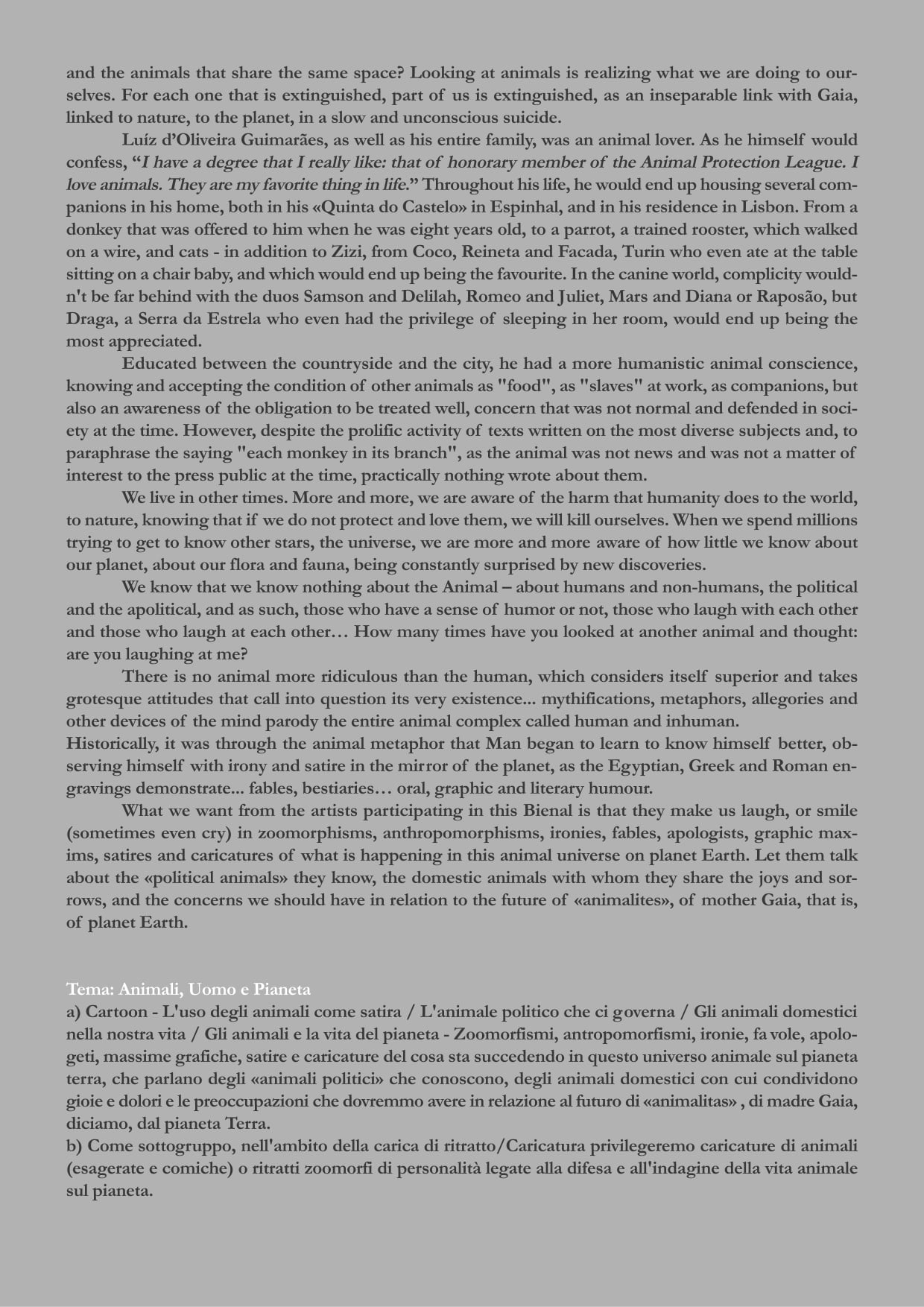 A Production: Humorgrafe - Artistic Director: Osvaldo Macedo de Sousa ( This email address is being protected from spambots. You need JavaScript enabled to view it.)

The Bienal where humor does not need colors, just a smile, philosophical intelligence and a simple and direct color – black and white (monochromatic). More important than the awards is having a voice, expressing your humor, your irreverent ideas in communion with the community.

1 - Theme: Animals, Man and the Planet

a) Cartoon - The use of animals as satire / The political animal that governs us / Domestic animals in our life / Animals and the life of the planet - Zoomorfisms, anthropomorphisms, ironies, fables, apologists, graphic maxims, satires and caricatures of the what is happening in this animal universe on planet earth, that they talk about the «political animals» they know, the domestic animals with which they share the joys and sorrows and the concerns that we should have in relation to the future of «animalitas», of mother Gaia, whether say, from planet Earth.

b) As a subgroup, within the scope of the portrait-charge / Caricature we will privilege animal caricatures (exaggerated and comical) or zoomorphic portraits of personalities linked to the defense and investigation of animal life on the planet.

2 - Open to the participation of all graphic artists with humor, professionals or amateurs.

4 - Each artist can send, via e-mail in digital format (300 dpis A4 size) up to 4 monochrome works (one color with all its shades - 2, 3 or 4 color drawings are not accepted - open to all techniques and styles such as caricature, cartoon, humorous drawing, comic strip, comic strip (story on a single board) ... these should be accompanied with information of name, date of birth, address and e-mail.

6 - The Jury grants the right to make a selection of the best works to exhibit in the available space and catalog edition (which will be sent to all artists with reproduced work).

7 - The Organization will inform all artists by e.mail if they have been selected for the exhibition and catalog, and which artists have been awarded. The works awarded with remuneration are automatically acquired by the Organization. The originals of the winning entries must be delivered to the Organization (the original in computer-made works is a high quality A4 hand-signed, 1/1 numbered print), because without this delivery, the prize money will not be unlocked.

8 - Reproduction rights are the property of the Organization as soon as it is for the promotion of this organization and are punctually discussed with the authors in the case of other uses.

10 - The VIII Humor Biennial Luís Oliveira Oliveira Guimarães - Espinhal / Penela 2022, opens on September 3 at the Espinhal Cultural Center, but may also be exhibited in other places to be designated.

Animals, Man and the Planet

We are all animals, despite the human animal trying, psychologically and philosophically, to justify that he is less of an animal than the rest of the animality, because after all we are human!!!!!!

It is true that we are a primate species, "evolved", that is, human animals. All! All of them, even though, at times, certain leaders, certain “ethnicities” and “tribes” try to present the “others” as less human beings, to justify their violence, their mental prejudices and their animalistic arrogance.

Basically, talking about animality is talking about all of us and about our relationship with the rest of nature, that energetic amalgam that makes up mother Gaia, who inhabits this planet. Today, we stupidly and ignorantly try to move away from our internal animality, this energy that the ancestral peoples, the shamans invoked to speak with the universe. This recognition of the animal in us meant that, for example, when we needed to kill to feed ourselves, we knew how to ask for forgiveness and dialogue with others in order to commune with their energies and keep ourselves healthy, body and soul, as well as keeping are the entire ecosystem. Now, in addition to killing just for pleasure, a destructive and violent sense, we end up being an endangered species, because we have become selfish, solitary and superior, not worrying about terrestrial biocenoses, tormented more by the immediate economy than with survival in the future of the planet and humanity.

The living reality is that we barely understand each other and we barely know life on Earth. We are more interested in looking for new worlds, other planets, other systems… rather than finding more realistic local solutions. How can anyone find a future if they can barely see, if they barely know their planet and the animals that share the same space? Looking at animals is realizing what we are doing to ourselves. For each one that is extinguished, part of us is extinguished, as an inseparable link with Gaia, linked to nature, to the planet, in a slow and unconscious suicide.

Luíz d’Oliveira Guimarães, as well as his entire family, was an animal lover. As he himself would confess, “I have a degree that I really like: that of honorary member of the Animal Protection League. I love animals. They are my favorite thing in life.” Throughout his life, he would end up housing several companions in his home, both in his «Quinta do Castelo» in Espinhal, and in his residence in Lisbon. From a donkey that was offered to him when he was eight years old, to a parrot, a trained rooster, which walked on a wire, and cats - in addition to Zizi, from Coco, Reineta and Facada, Turin who even ate at the table sitting on a chair baby, and which would end up being the favourite. In the canine world, complicity wouldn't be far behind with the duos Samson and Delilah, Romeo and Juliet, Mars and Diana or Raposão, but Draga, a Serra da Estrela who even had the privilege of sleeping in her room, would end up being the most appreciated.

Educated between the countryside and the city, he had a more humanistic animal conscience, knowing and accepting the condition of other animals as "food", as "slaves" at work, as companions, but also an awareness of the obligation to be treated well, concern that was not normal and defended in society at the time. However, despite the prolific activity of texts written on the most diverse subjects and, to paraphrase the saying "each monkey in its branch", as the animal was not news and was not a matter of interest to the press public at the time, practically nothing wrote about them.

We live in other times. More and more, we are aware of the harm that humanity does to the world, to nature, knowing that if we do not protect and love them, we will kill ourselves. When we spend millions trying to get to know other stars, the universe, we are more and more aware of how little we know about our planet, about our flora and fauna, being constantly surprised by new discoveries.

We know that we know nothing about the Animal – about humans and non-humans, the political and the apolitical, and as such, those who have a sense of humor or not, those who laugh with each other and those who laugh at each other… How many times have you looked at another animal and thought: are you laughing at me?

There is no animal more ridiculous than the human, which considers itself superior and takes grotesque attitudes that call into question its very existence... mythifications, metaphors, allegories and other devices of the mind parody the entire animal complex called human and inhuman.

Historically, it was through the animal metaphor that Man began to learn to know himself better, observing himself with irony and satire in the mirror of the planet, as the Egyptian, Greek and Roman engravings demonstrate... fables, bestiaries… oral, graphic and literary humour.

What we want from the artists participating in this Bienal is that they make us laugh, or smile (sometimes even cry) in zoomorphisms, anthropomorphisms, ironies, fables, apologists, graphic maxims, satires and caricatures of what is happening in this animal universe on planet Earth. Let them talk about the «political animals» they know, the domestic animals with whom they share the joys and sorrows, and the concerns we should have in relation to the future of «animalites», of mother Gaia, that is, of planet Earth.

The 5th edition of the International Cartoon Competition/Morocco, 2022