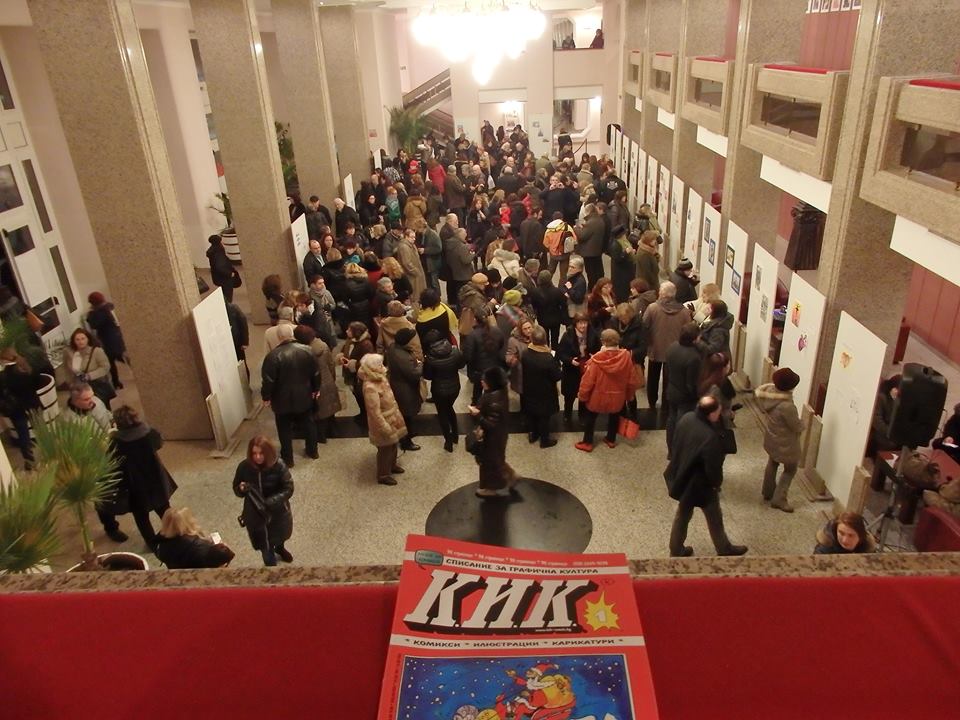 Comics Club "Marcello" - Rousse was founded in 2013 by Stoyan Komitski and Miroslav Petrov (writer, writer of comics) and artist Nikolay Marinov and Daniel Stefanov. In 2015, the club include Arch. Orlin Nedelchev and Biser ENCHEV (consultant clothing and weapons), artists and Roberto Valentin Georgiev Andreev, and also Milen Droumev (antiquarian). The main activity of the club is to search, store and protect Bulgarian and foreign comics, as well as to establish such. So the club is actively working with only one here permanent exhibition "Museum of Comic" (from May 30, 2014), together with Ruse library where for the third consecutive year organize the International Competition for comics and blitsanimatsiya. Priority Club is educating comic culture. Its members work actively in that direction - by organizing workshops for comic art workshops and classes on comics.
Stoyan KOMITSKI (or KOMIKSKI)
- and to say - as if ... We will begin its submission by the end of May 2014, when in Rousse opened one of its kind not only in Bulgaria but on the Balkan Peninsula Exposure "Museum of comics." It is housed in a regional library "Lyuben Karavelov" whose rakovodstvopodkrepi Stoyan Komitski. He is known in the Danube town as a researcher of Bulgarian comic art, as well as the creator of their own stories in pictures. 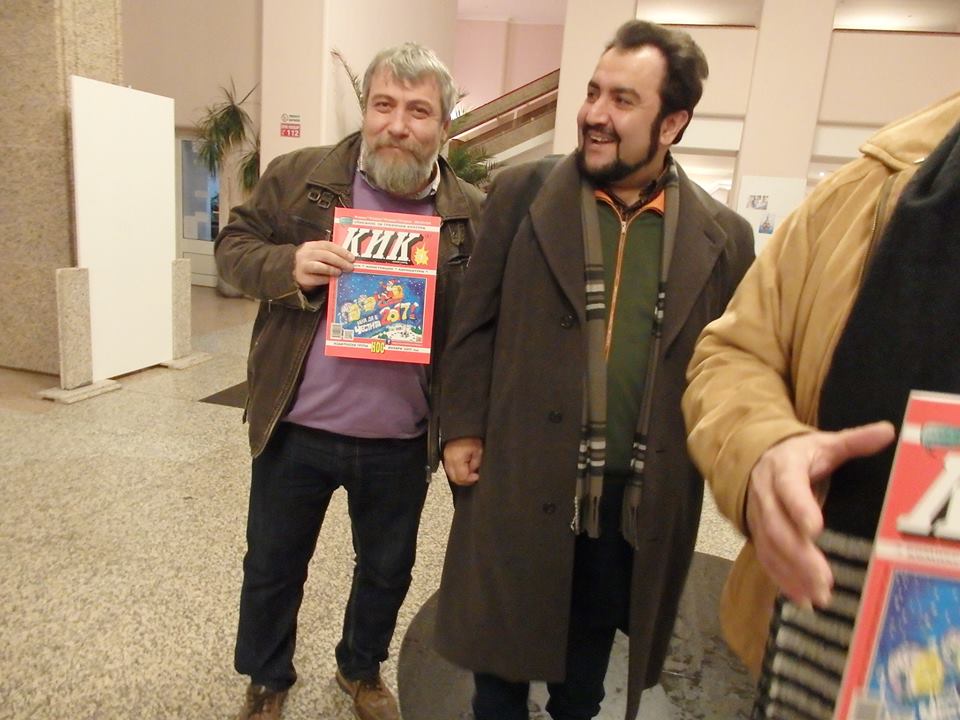 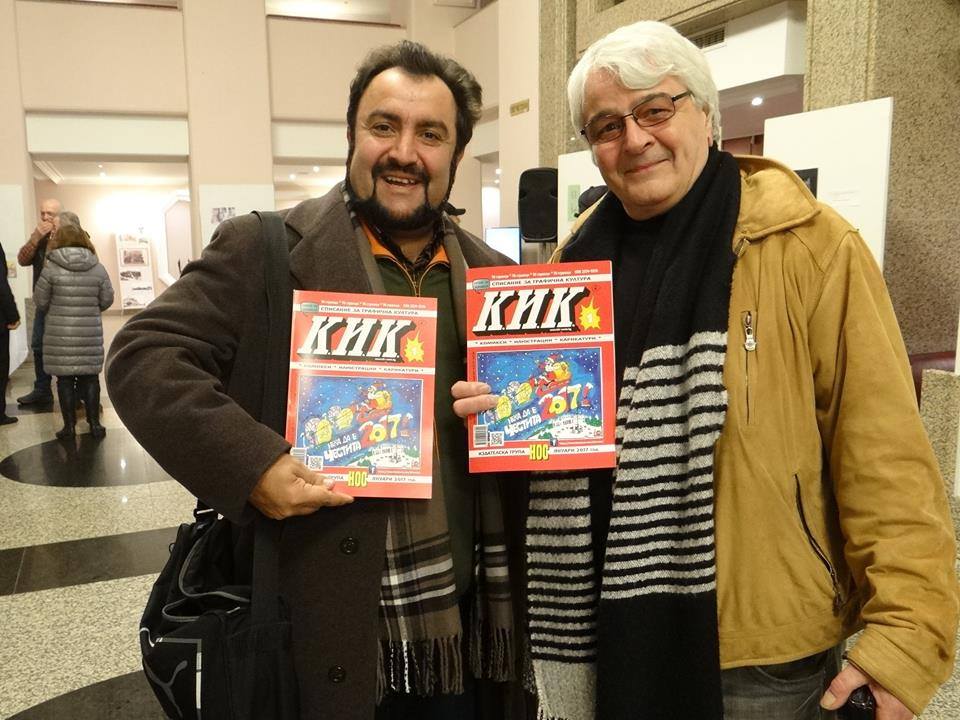 For the most part presented comics are from his personal collection, which numbers impressive figure ot 12000 titles on paper and digitally, and oldest, yet most valuable exhibit is the first issue of "Children's newspaper" the distant legendary 1926 and loved magazine "Rainbow" issued in the period 1979 - 1992, the place is among the many colorful treasures.
Stoyan Komitski does not hide his excitement from the realization of this major project and called it "a dream come true." The idea came to him in 2001, and although he has waited long man from Ruse was happy with the opening of "Museum of Comic" indicator not only patience but also for his courage to follow through non-standard whim.
His youthful passion to collect stories in pictures developed in the study of art and soon out of print will come out 15-year-old labor devoted to comics. The passionate lover has set a goal to finish and release his own picture story of Jacko Robber, planned as a booklet of 48 pages with absolutely original, original storyline. 42-year-old man from Ruse revealed that his inspiration are folk tales and historical studies, which separates much of his free time.
As with many other Bulgarian children, namely magazine "Rainbow" in the 80 years of the twentieth century ignited in him the flame of love kamrazkazite in pictures. Fascinating tales of the unexpected become desirable gift from the small Stoyan and his brother. Three decades later, the passion for comics is not only not disappeared, but strengthened, leading to the realization of unique for our latitudes Museum.
Crowded recently chests in his house already empty as Komitski donates all his comics of Rousse library, but says she never regretted the decision.
"To share his joy is even greater happiness!" - Recognizes the young man and tells how his initiative in Rousse run workshops for comics, turning in late children drawing favorite characters.
During the opening of the new museum was presented longest comic strip, which the museum will fight for entry into the book of Guinness World Records. Painted in for months by children, parents, public library patrons, representatives of various institutions and many other local citizens.
Since the autumn of 2014 to the present Stoyan Komitski writes and prepares for printing a unique country specialized periodical weekly comic "Comics Art Forum", a weekly supplement of the newspaper "Forum". In conclusion - will sound immodest to say that the original idea for "K.I.K." is precisely Stoyan Komitski ... In recent months it even for a moment not stopped looking for authors and contributors of the magazine ... and managed to convene under the banner one of the best Bulgarian comic artists and writers ...Nikolay Marinov Marcello (Daskal Kolyo)

2020 The list of participants of COAST TO COMIX /ITALY